Cowichan Couple Gets New Roof, Thanks To Friends And Businesses 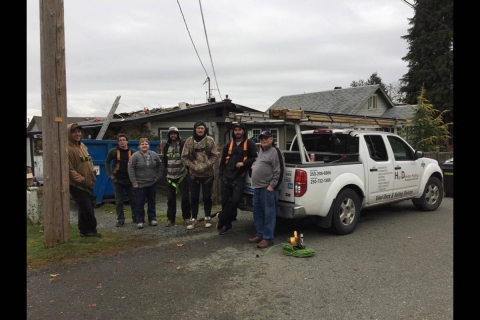 Friends and local businesses have come together to assist an aging couple in the Valley fix their dilapidated roof in time for Christmas. Leigha Rota, who worked with Kathy Bocking at Home Depot in Duncan a decade ago, said they became so close, a lot of people assumed they were mother and daughter and they have kept in touch ever since. She said it was hard for her when Kathy was diagnosed with stage 4 Hodgkin’s Lymphoma on her birthday in November, 2017. Rota said Kathy is the main bread winner for her family, as her husband Dick is retired.
“They needed a new roof, so we all rallied together,” she said.
“Kathy was always the first person to organize in-house fundraisers for staff at Home Depot, so Home Depot did an in-house fundraiser for Kathy. Another coworker and friend, Wendy, started a GoFundMe page and an account at the bottle depot. We were also thinking of other ways to raise money.”
Rota said she and her boyfriend decided to hold a garage sale and collected enough items from the staff at Home Depot and the general public to host a three-day sale at their home.
“People donated even without buying anything after hearing that it was a fundraiser for our friend battling cancer that needed a new roof,” she said.
“Between the GoFundMe page, garage sale, and returnables we sorted and cashed in, we raised a few thousand dollars.”
With some money raised to get the roofing project started, Rota said the next task was to find a roofing company that would get into the spirit of giving to do the work. She said she contacted High Definition Roofing at the advice of a worker in Duncan’s Cedar Grove Roofing Supplies.
“The owner, Dave Niebergall, got back to me pretty quick and said it must be meant to be because he was just talking with his business partner about doing something like this,” Rota said.
“He used his connections within the trade to get a few local companies involved in this project, donating their time, products and services. Many thanks to Malarkey Roofing Products, Cedar Grove Roofing Supplies, Onside Restoration and Coast Environmental Bins. The new roof finally went up on Nov. 18. A huge heart-felt thank you to Dave Niebergall for organizing all of this and providing a great crew of guys to do the work.”
Kathy’s cancer is now in remission and she has returned to work at Home Depot, albeit part time for now. She said the work by Rota and everyone else involved to get her and Dick a new roof on their home was an “incredible surprise”.
“Leigha has the biggest heart and she helps with elderly people, clean ups and other activities in the community,” Kathy said.
“Leigha is a great asset to the Valley. It was an old roof that was leaking so it’s great to have a new roof, with a lifetime warranty, in time for Christmas.”
Original Story

High Definition Roofing is a multi-year Vancouver Island BBB Torch Award FINALIST! And 2018 BBB Torch Award Winner! But we can't do it without your nomination. We'd like to thank our happy customers, Rob & Kelly of Victoria, BC, for taking the time to nominate us! Here is what they had to say... "We had High Definition Roofing replace our roof - they did an excellent job, and were the utmost in professionalism from start to finish and provided excellent quality work on our home. My husband used to be in the construction trade for many years and he is very picky and expects very high quality results. High Definition Roofing met his criteria and exceeded it with their attention to detail. We would recommend Dave Niebergall, High Definition Roofing for the Torch Award because this is the type of roofing company that should be recognized for providing sound work and who stand behind their service to the homeowner." - Rob & Kelly, Victoria, BC.

You too, can nominate High Definition Roofing, by filling out the BBB Torch Award nomination form.

What our clients say...

I want to thank you and your crew for doing a wonderful job on re-roofing our house.

As you may remember, I was definited in my ideas about wanting dark colour flashings, wanting a certain colour and kind of roof, good looking vents... and you exceeded my expectations.

Each of your employees was courteous, professional... read more